Big Thank You to Jose at the New Times food blog...


Hi Jose-I forgot to thank you for your heads-up. Nothing personal, to you or Klein, but if you read Klein's piece today, I think you will get an idea as to why I loathe his column. There are so many innaccuracies that I had to laugh. I hope you understand that I don't criticize out of malice-just out of the undying belief that food writing should be held to the same high standards as every other kind of writing. The entire paragraph on 'flat' steak was hilariously rife with errors.

"The big hit in both categories are the grilled meats, ranging in cut from skirt to New York strip to filet mignon to a pair of thick, succulent double lamb chops, and in price from $18 to $24 (the chops). We particularly enjoyed a plush Reubensian plank of "flat meat," even if our waiter couldn't explain what it was when we ordered it. A manager visited shortly afterward with a description and the helpful info that Argentines call the steak vacio — at which point we knew what to expect. This cut is part flank, part hangar, and lots of fat tissue, which contributes to a crunchy exterior and chewy, juicy flesh. Bartolome's flat meat was just that, as well as imbued with deep beefy flavor."

I challenge you to do a simple google/wikipedia search on terms like vacio (with so many Argentinians living and cooking in Miami, how could one not know this?), FLAP steak, flank steak, and, of course, 'hangar' steak. If someone made this many errors anywhere else in the paper...Well, perhaps your credo for Cheap Eats, "no research required", has been taken up by the rest of the paper. Maybe an educated guess is all that's really required anymore. Educated guess. Yeah.

Anyway, thanks again for the heads-up. I have a feeling I'll be 'linking' to you guys an awful lot...
Cheers,
Danny 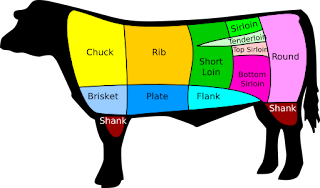 Where have they been hiding her? I welcome her into the Miami blog pantheon; although sharing the spotlight with La Klein-in fact, having to defend Mr. Klein's blog posts is going to be a lot of heavy lifting if one judges by the 'Rendezvous' post. Judge for yourself...
http://blogs.miaminewtimes.com/shortorder/2008/07/rendezvous_with_a_ripoff.php#more
Now I'm not saying that South Beach isn't full of rip-offs or that not mentioning the price of a daily 'special' (or not bothering to mention that your tip was included in the price of a drink the bartender just charged you) is anything but a scam. But the point I am trying to make is that in any transaction the operative phrase is Caveat Emptor-buyer beware. If I don't ask how much something is going to cost me before I consume it, I am an asshole. If a restaurant doesn't mention the price when reciting specials, and I order said special, and I don't ask the price of said special, I am an asshole. "How much is the Surf & Turf?" 6 words and an ampersand. Of course the restaurant is going to charge you $105. Because you are a moron. You are eating on one of the most heavily touristed rip-off streets in the world, Ocean Drive, at a restaurant no one's ever heard of (Rendezvous), and you are ordering surf and freakin turf.

But my larger point was that perhaps there was another side of the story that these two delightful tourists from Danbury, Connecticut, Peter and Neil may have left out. Was there another side of the story-the restaurant's side? People complain about getting ripped-off all the time. If I said that Home Depot charged me $100 for a hammer, you'd ask for more than the receipt-as a journalist you might call Home Depot, ask to speak to the manager, and get their side of the story. Now I'm not no professional journalist like the hit-man LK47 or major stoner Gail Sheperd http://blogs.miaminewtimes.com/shortorder/2008/07/big_sexys_sinful_sweets.php , (go GShep!) but maybe if you are about to put something out there that could drive someone out of business or stain their reputation for all eternity, you might want to include their side of the story. Make one fucking phone call. Even to say, "the restaurant had no comment", or you could even say "the restaurant wasn't available for comment" (it's bullshit but at least it seems like you are trying). Why is it that every freakin topic in the world gets taken seriously except the one about which I care most passionately? Even the traffic reports are more balanced.

And one more thing. I noticed in her balanced annual piece on the Design District for the Miami Herald, Lydia Martin mentioned that Michael's Genuine Food & Drink was mentioned as one of the New York Times' 10 Best Restaurants in the US. In point of fact, it was called by Frank Bruni, the Times critic, one of the ten best NEW restaurants in the US for 2007. This is obviously quite a distinction, and one that might get past someone who doesn't write about food regularly. Of course it is still a great accomplishment for Michael Schwartz, but what made me wonder even more was that this claim was repeated in the Miami Sun Post's 'Best Of's'. Perhaps someone was using Ms. Martin's piece for research? Look, I read the Times articles (it was a series of three, actually), and I enjoyed having eaten at two of the top ten in the same week (MGFD and Michel Richard's Central in DC), but I'm assuming I can not be alone in having read the damn thing. Am I alone? Am I the only douche out here? I love reading about restaurants, I really do, and I sometimes fall off to sleep reading vintage cookbooks. But when I do my research, I also like to talk to the people who are, as a great man once said, "down in it."

Unfortunately, according to the web editor of the New Times food blog, and the writer of 'Cheap Eats', when I queried him on why he didn't ask the owner a question to clear up an issue, he responded that "research is not required." That just about says it all, douchies.
Posted by Danny Brody at 6:55 AM 3 comments: