I didn't plan on expanding out of Miami so soon, but this article, to which I was directed by Lax2Mia on Chowhound, is so filled with misconceptions and downright untruths, that I feel compelled to give a small salute to Laura Reiley, 'Times Food Critic'.
http://www.sptimes.com/2008/01/27/Travel/A_foodie_s_guide_to_M.shtml
If you go to this article, you will notice that she touts Marilu's French Box Cafe, "...the tangy Breton-style buckwheat crepes at the more established Marilu's French Box Cafe...", which has been closed for three years (they must be pretty 'tangy' by now), and recommends having "...a glass of the latest Super Tuscan at the just-opened Fratelli Lyon...", which is not, in fact, open at all. The opening is planned for at the earliest, Mid-March. I spoke with the manager personally today. (Took ten minutes.) She also mentions the " juicy pan-roasted poulet rouge chicken" at Michael's Genuine; while it may be juicy, it is obviously 'wood roasted', seeing as the wood-burning oven is the centerpiece of Michael's exposed kitchen (it's also right there on the menu, available for online 'research').
Mistakes, maybe. Outright bullshit? You be the judge. Feel free to add any other blunders you may find in this major howler. And "Miami food writer Pamela Robin Brandt", call your attorney. Below are photos taken today of 3622 NE 2nd Ave (Ghost French Box, something else for a long time), and Fratelli Lyon's front window. Truth in Food. Have a great weekend... 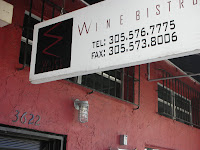 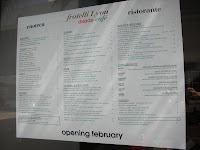 Re MGFD's chicken - actually the menu does describe the half-chicken (in the "large plates") as a "pan roasted 1/2 'poulet rouge' chicken." The full chicken in the "extra large plates" (which rocks out with its cock out, so to speak) is described as (and is) "wood roasted" (or, perhaps more accurately, "wood-oven roasted").

Nonetheless the article really reads like it was written from St. Pete without having actually visited Miami. Hey, if it worked for Jayson Blair at the NY Times ...

Point taken, Señor Frod. The writer could have been referring to the 1/2 chicken. But I think, if you read the whole line, "So, after investigating the juicy pan-roasted "poulet rouge" chicken and an order of quickly fried hominy doused with chili powder and a splash of lime at Michael's Genuine, we headed down the street...", it seems the 'investigation' may not have included any 'gustatation',as we used to say. I don't think anyone could eat the rather unusual, some might say signature, hominy dish that Michael makes, and not describe it AT ALL. And even the "juicy' description of the chicken seems oddly perfunctory. Additionally, there is not ONE QUOTE from ANYONE. Other than Pamela R B. Seriously, Laura couldn't spend a few minutes getting some interviews? She could have at least gotten on Chowhound and mined some stuff from Frodnesor. Isn't that what all the kids are doing?

Having finally located St. Petersburg on a map I feel qualified enought to write an article about its dining scene.

Bern's is a great addition to the dining scene in St. Petersburg.

That's all I got.